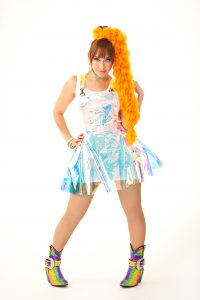 Described as “like Lady Gaga for kids,” with a super pop sound mixed with a touch of Broadway belt, a sparkling soupçon of hip hop, and plenty of EDM glam, Twinkle has always danced to the beat of her own drum, breaking barriers, sound and otherwise, with both her music and Harajuku-style presentation.

“The Peruvian American Pop Star for Children -The Like Lady Gaga for Kids!” ” New York Times

“Our favorite bilingual kids and family artist… an ongoing message of positivity with an ‘edgier, Top 40’ sound.”
– Amplify Dave Brooks

The second I saw Twinkle in concert I said to myself WOW, this is a TV show ! Twinkle is a STAR, positive role model for kids around the world and to top it off even parents can rock out to Twinkle Time ! “
– Christina Applegate Producer/Actress/Mom

“Twinkle and her TwinkleTime world is second to none. Her music and live concerts showcase a musical children’s artist who has staying power! ” – Nick Bernstein VP of CBS Late Night

“In terms of an all-out kindie pop extravaganza – EDM, hip-hop, pop all rolled into one – Twinkle Time is on an entirely different level than most independently produced kids’ music.” – Zooglobble

“Twinkle Time known for her colorful, energetic, bilingual performances, Twinkle and her band play several hundred times a year nationwide. Twinkle, in fact, shows several musical sides powered with a big dance beats ,or soulful groove or the big rock sound or even some jazz touches, Twinkle includes all styles all rolled into a one of a kind Twinkle-jam .”
– L.A. Parent Magazine

“We arrive at the Children’s answer to Lady Gaga! Twinkle’s Just Dance Album is very contagious she keeps the beats flowing right through to the very last note.” – The Record-Journal

“Twinkle’s New Album Just Dance is full of original tracks that belong in a club where they don’t card if your under 12. My kids are rocking out and learning to this album even as I type this.”- Tenor Dad

Twinkle Time new album Just Dance a grown up record for kids that just want to kick it out and dance. A real nice party on a platter for the kids, you can give this set a parental seal of approval without letting the young ‘uns in on your secret. Solidly enough produced that you won’t mind hearing this a million times in the car as you helicopter your over scheduled kids from hither to yon.” – Midwest Record

“Moms and Dads: Heard all the buzz about singer Twinkle? Raising young children now, looking for a refreshing up and coming family-friendly musical artist who is hip and fun, as well as inspiring and wholesome for the generation growing up right now? Then Twinkle Time just be what you’ve been searching for ” – Mommy Blog Expert

“Giving Kids the variety of music that is available to them, but with out the adult messages and words seems like a tough feet, but one kindie artist that is dishing out this exact type of music is Twinkle!” – My Springfield Mommy

Exclusive news will make its way directly to your inbox. Be the first to know where Twinkle will perform next!